Norma, the new (to us) travel trailer

We bought this one about a mile away here in Otis. Really well loved and we thought she'd be the total answer for having to move out of the double wide trailer while we build a new home next year.
Ended up having a bit of a leak issue in the pop out so we had to do a major floor repair.
The fun just doesn't seem to end up here but we made the best of it and remodeled by taking out the
old couch/bed and putting in a nice Lazy Boy recliner we found online. SO MUCH BETTER!!! 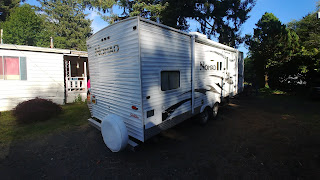 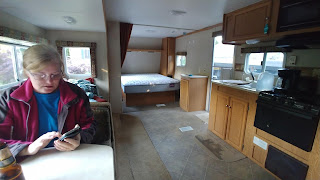 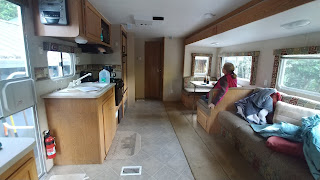 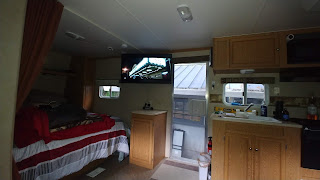 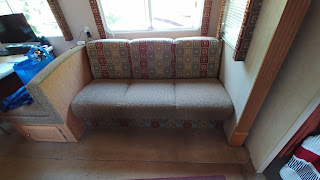 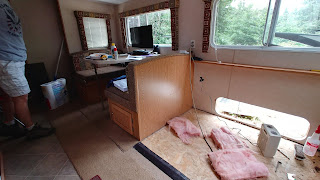 Dining table area and the far right
had a long time water leak from the
exterior trim not being installed
correctly at the factory.
The previous owners had no idea it was leaking
and we didn't either until we took the couch out. 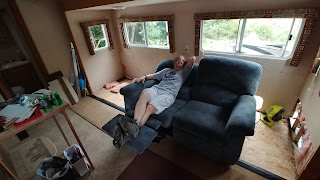 The Misses, test fitting the new couch out.
Hard to find good help these days :-) 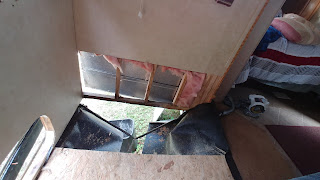 Area we had to remove that was bad. 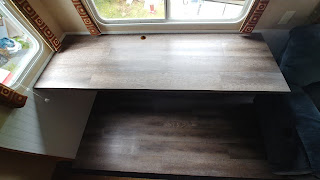 We took out the dining area and installed
the door from the old trailer as a desk.
Covered it in vinyl flooring that is the same as
what we used on the pop-out after we did the repairs.
Even used the door knob hole for the wiring on the computer.
Turned out really nice and actually much more functional now.
AMAZING what you can do with some BEER-BUILDING!!! 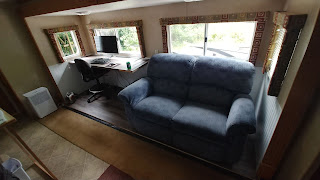 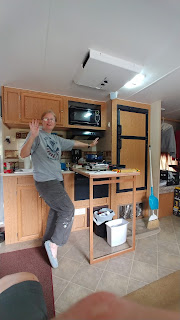 Table extension we built for a bigger counter.
Yep she's ALWAYS
LIKE THIS ;-)

We are back on the road again, Yahooo!
Feels like old times from our previous three month, 13,000 miles trip across the nation back in 2012. It was such a great trip and we got along so well, living/camping/exploring out of the Chevy Astro van that we got married in Las Vegas on the way back to Florida. Trina got the proposal in the Lava Tubes/Ape Caves National Park on St. Helen's, figured she couldn't out run me in the dark ;-).
We've been to so many big parks, off the beaten path hikes, brewery tours and just enjoying each other's company since 2007 when we met on the Yahoo dating site.
Looking forward to seeing more of the country, revisiting old passions like photography, shooting video with my drone, kayaking/rafting and exploring new places with my best friend.