The Trailer From Hell, LOL

A lot has happened in the last couple months since the previous post.
We are all "Oh"-fficial Oregonians, driver's licenses and plates on all the vehicles but I don't care for putting one on the front of the Explorer and especially the Mini!!!
Took the Triumph out and actually had a few curves to go around, like LOTS of them!

The weather has been about perfect with the lows in the mid 50's and warming up into the upper 60's most days and a few into the 70's even. Nice and dry with only a day or two of drizzle in the last month at least.

We were going to ride out the winter in the old double wide trailer that was on site till we get the house built next year but it ended up having to much roof damage from bad construction and repairs over it's life. We gave up on it and bought a used 27' travel trailer and have been living in it for a few months now. Mom bought a 18' travel trailer and is staying on the lower 40 till we can get the old double wide demolished and then we'll move both of the travel trailers up there where we can connect to the water and more importantly, sewer, which is already plumbed in.

Making lots of progress on the demo but it's been a long struggle and it seems like everything that can go wrong pretty much has. Good thing is, Trina and I can tackle and beat just about anything. Mom is a load of help as well and she's been getting all her FitBit steps in each day toting debris back and forth to the dumpster. We'd filled two 20 yard, one 30 yard and are on our second 30 yard dumpster now. Amazing how much stuff was left behind. Elaine's hubby, Matthew, has been so much help and he's fun to have around when he comes over to help. We get so much done!

The old trailer had to be inspected for asbestos, law out here, and it was found in some of the vinyl flooring backer. We had to remove all the kitchen, dining, bath and part of the bedroom. After ripping up all that fun 7/8" particle board floors with about a million (no joke) staples we had to get a container to store it in and then take to a dump that will dispose of it...yep, it gets expensive!

Other than that, we are rolling with the punches and seeing a bit of light at the end of the long, long, long tunnel. The days that it gets a bit overwhelming all we have to do is go down to the river with a few (or more) beers and listen to the water going by. Makes it seem so much better for sure.

Here are a bunch of pictures and a couple videos of all the stuff we've been up to recently.

From today's "get even with the trailer from hell" 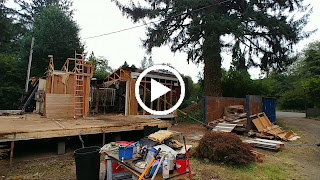 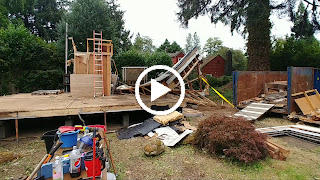 The old double wide.
From 1979, they just don't
build them like they used to!
Thank Goodness.

This was the re-roof, well


it ended up being three or
four of them over the years.
Did a lot of damage from
all the water leaks.

We thought we had it beat for awhile, then found more issues that made it totally unsafe to live in.

Had a working kitchen, even


after we tore it all out.
Like camping from a
sort of home.

Then we found out it had the asbestos that need to taken care of.
That spelled the final nail in it's coffin and the demo started.

All the bad flooring had to be removed
and loaded in that bag.
Yep, we had lots of jokes about
the trailer giving birth :-) 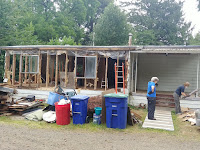 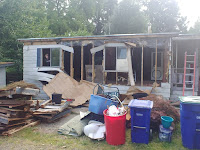 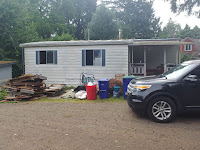 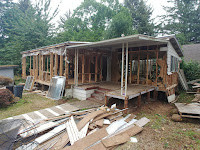 All the insulation, paneling and siding had to come down. 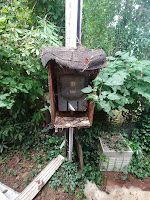 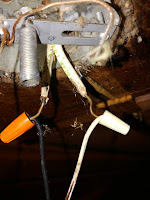 Some of the great electrical work
from a previous EXPERT. 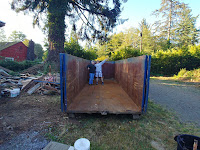 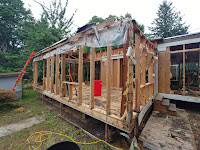 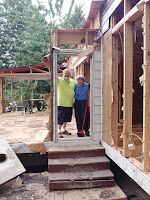 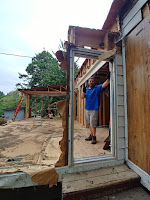 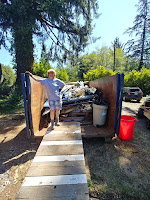 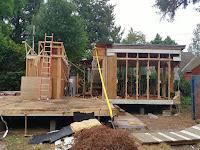 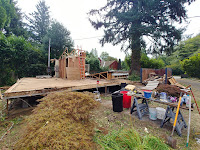 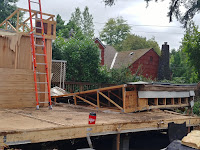 We are back on the road again, Yahooo!
Feels like old times from our previous three month, 13,000 miles trip across the nation back in 2012. It was such a great trip and we got along so well, living/camping/exploring out of the Chevy Astro van that we got married in Las Vegas on the way back to Florida. Trina got the proposal in the Lava Tubes/Ape Caves National Park on St. Helen's, figured she couldn't out run me in the dark ;-).
We've been to so many big parks, off the beaten path hikes, brewery tours and just enjoying each other's company since 2007 when we met on the Yahoo dating site.
Looking forward to seeing more of the country, revisiting old passions like photography, shooting video with my drone, kayaking/rafting and exploring new places with my best friend.